When you’re walking around the Chaos Cards buildings and are hearing animated discussions about a brand new TCG, then you head onto your chat app and are being asked when we’re getting it (not whether, but when), and your social channels are dotted with discussions of game mechanics for this new TCG, you can’t help but be a little excited about this new game and where it’s headed.

We’ve seen TCGs come and go in our time and with the top TCGs stronger than ever, despite a worldwide pandemic in progress, there’s always going to be that question of whether there’s room for more. And I genuinely think there is, especially in this case.

In 1997, Digimon were created as a series of digital pets similar to Tamagotchi, a cute digital pet that you nurture from an egg into a fully grown creature. The creators of Digimon realised that for the less maternal among us, the sheer grief that you felt when you went off to school without a care in the world, only to come home at the end of the day to find your tiny little pixelated creature hadn’t survived, was too much to bear. So the premise behind Digimon (Digital Monsters) was more to do with battling creatures rather than nurturing them, starting with a baby creature (that hatches from a Digi-Egg) and gradually levels up (Digivolution), becoming stronger, with better attacks over time. Upon the initial release, it was even possible to connect two devices to battle creatures, which at the time was pretty innovative.

The premise of the Digimon Card Game is actually very similar to the adorable little battling creatures of the late 90’s, using the premise of Digi-Egg cards to reveal newly hatched Digimon, plus the ability to evolve your Digimon into more powerful versions. You battle your opponent’s creatures and attempt to reduce your opponent’s Security Area cards to zero in order to deliver a final blow direct to your opponent and win the game.

For the more seasoned of TCG fans amongst us, this game has been really well thought out, taking game mechanics from other TCGs to give you that sense of familiarity (such as ‘resting’ and ‘evolving’), but being different enough that you get that ‘new game’ feeling of wanting to pull the starter deck apart and build something even better with your boosters. The system of the higher the cost of the cards you play on your turn giving your opponent more ‘memory’ to use for their next turn makes for extremely even gameplay and adds an additional element of strategy that gives the Digimon Card Game a really fresh feel.

To get us all started, there are three Starter decks being released, Cocytus Blue, Gaia Red and Heaven’s Yellow and two Special Boosters, Verson 1.0 and Version 1.5, which contain cards from three different Japanese releases BT01, BT02 and BT03. 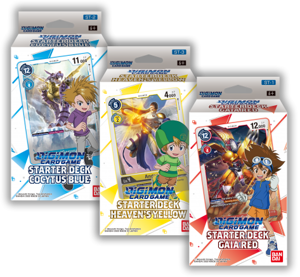 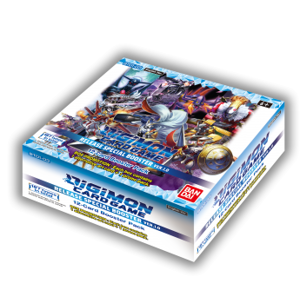 We can’t wait for the release of the Digimon Card Game – we hope you’ll join us on this new TCG adventure!

Commander is Getting its Own Booster!

AMAZING as always!! thank you so much for my order.