Commander Legends is the first Magic the Gathering set designed to be drafted into a Commander deck and played multiplayer using the Commander rules.

It's a long awaited set for Commander players and comes after many years of sets such as Conspiracy and the Mystery Booster, which, as fun as they are to play, aren't specifically designed for Commander. This set features 20 card booster packs with two dedicated Legend slots and rules meaning that to speed up the drafting process, two cards are drafted from each booster instead of one per booster. Furthermore, it's flexible enough to play sealed or drafted, as the singleton rule doesn't apply for Commander drafting, so you can have as many copies of one card as you like in your deck. The set is larger than a normal set though, in order to keep the card pool large enough that you shouldn't have too many copies of one card available to you per deck.

The draft booster is the main set booster and each player only needs 3 boosters to build a commander deck. You'll have plenty of choice of Legends with two in each pack and the potential for two Commanders with the 'Partner' ability having returned.

The collector boosters come in boxes of 12 boosters and contain extended art and alternate art cards with some foil etched cards available too.

There are two to choose from in this set and you'll get a 100 card singleton deck with a choice of Legends and a life tracker. 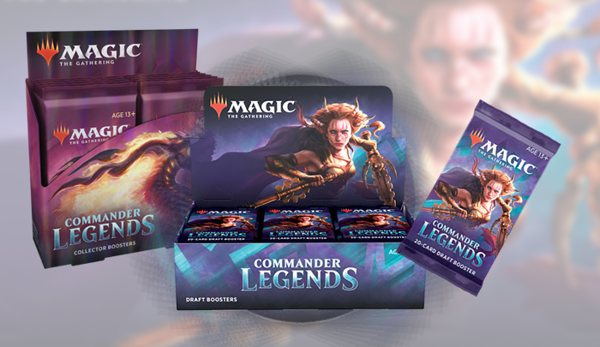 Purchases are quick, simple and efficient.

Purchasing a yugioh booster pack was pretty quick and simple. Not to mention it was the cheapest place I could find to purchase them. The increased price for next day delivery is almost nothing and without any sort of delay the booster pack came the next day. I have preordered 4 more packs from this site and I look forward to purchasing more in the future.

Arrived well packaged and on time