With less than a month until the Pokémon Trading Card Game ‘special’ Expansion Champion's Path drops, there is a lot of hype building about this exciting new set.

Last year's Hidden Fates expansion was a collector's dream filled with shiny iterations of cards from earlier releases. Champion's Path, however, promises to be more than just a collector's set with a pool of cards which competitive players can enjoy incorporating into their decks, as well as alternative-art reprints of some favourites from the Sword & Shield era.

Without a full set-list officially announced, we can all but speculate about which cards will make up the 70+ card expansion. Let's look at the cards and products which have been announced.

The first product to reach for from this anticipated release is the Elite Trainer Box (Champion’s Path official release date: 25th September 2020), boasting a Full Art promo of Charizard V, 10 Champion's Path booster packs and a selection of gameplay accessories. Like other special expansions before it (think Hidden Fates, Dragon Majesty and Shining Legends), products like these are the only way to pick up Champion's Path booster packs, and if the success of Hidden Fates is anything to go by, these Elite Trainer Boxes will sell out fast. 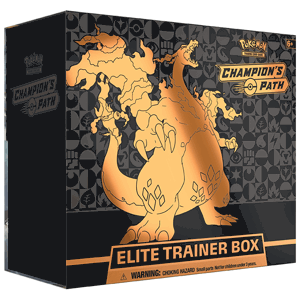 Next up, we have the Dubwool V and Hatterene V Collection boxes, each including one standard and one oversized promo of their respective card. Dubwool V, originally released as a part of Rebel Clash, has already made waves in the TCG thanks to its Revenge Blast attack making it one of the best finishers in the game. Hatterene V is making its debut in this Collection box - only time will tell if it will match Dubwool V's popularity with its Confusion-based Psychic attacks. 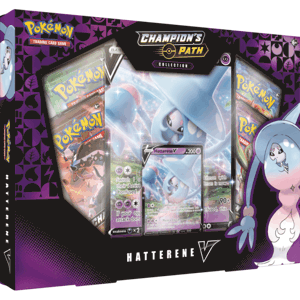 Six different Pin Collection Boxes have been announced (September 25 - November 13), each themed after one of the Galar Region's six Gym Leaders. The Pin Collections will feature a unique pin Gym Badge as well as 3 Champion's Path booster packs. You’ll also gain a promo of the Gym Leader's signature Pokémon (all alternate-art reprints), some of which could see play in the competitive circuit - I'm looking at you Galarian Obstagoon... These pin collections are a fantastic product, and a great opportunity to kit yourself out with Gym Badges like a true Pokémon Trainer!

Last but certainly not least will be the Marnie Special Collection box (October 23). This spectacular box comes with two of Marnie's signature Pokémon in the form of Grimmsnarl V and Morpeko V as alternate-art promos, as well as two character pins representing the iconic partners, plus eight Champion's Path Booster Packs. Marnie is certainly a fan-favourite, and I might have to join Team Yell after seeing this Special Collection Box...

On top of the cards we're getting as promos, Champion's Path will contain at least 70 new Pokémon Cards including “11 Pokémon V, three Pokémon VMAX, 19 Trainer Cards and one Special Energy”. Seemingly confirmed cards include Venusaur V, Inceneroar V, Lucario V and Duraludon V (all from the Japanese V Starter Decks). By doing a little detective work we can also determine Drednaw VMAX, Gardevoir VMAX and Alcremie VMAX will appear in the set (as well as their Basic V counterparts) due to their images appearing on the Booster Pack artwork. While these cards seem strong enough in their own right, my eye is on Alcremie VMAX and its G-Max Whipper attack capable of hitting insane numbers and knocking out another Pokémon VMAX in one shot!

This set is the most highly anticipated we've had for a while, potentially due to the whispers that the sought-after Rainbow Art Charizard VMAX will be secretly included as a part of the set. While this hasn't been confirmed, only time will tell if we'll be getting this behemoth of a card.

great in all ways

Great products for great prices with…

Great products for great prices with great service. What's not to love?